“We need healthy, creative and resilient children who know how to maintain wellbeing and can manage stress, judge risks and embrace failure as part of the learning process. It’s essential that we find ways of engaging young people with their technologies in order to do this.”

By developing emotional management skills, young people can learn to focus and perform better and protect themselves against more serious mental health problems. However traditional training activities, like meditation and yoga, are often seen as boring or irrelevant by this audience.

“When I’m in an argument I don’t feel right, I sometimes feel like I’m in a different planet, on a different world. When I did breathing I’d learnt in the game, I calmed down, came back to earth“

A videogame that trains young people in diaphragmatic breathing which helps them to regulate their emotions and learn how to self-manage stress, anxiety, panic, depression and pain. Champion of the Shengha was developed by our mental health-tech spin off BfB Labs.

“Games tap into the most fundamental ways we learn and feel. They are an incredible way of reaching out to young people regardless of nationality and background – and, in as urgent and universal a field as mental health, this promises to equip countless players with a proven tool for transforming their own health and resilience.” 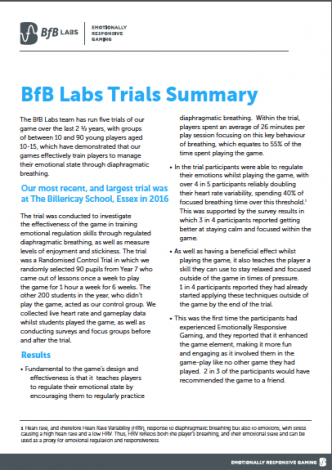 An evaluation report describing the results of the five trials of Shift’s emotionally responsive biofeedback video game, conducted to investigate the effectiveness of the game in training emotional regulation skills through regulated diaphragmatic breathing, as well as measure levels of enjoyment and stickiness. 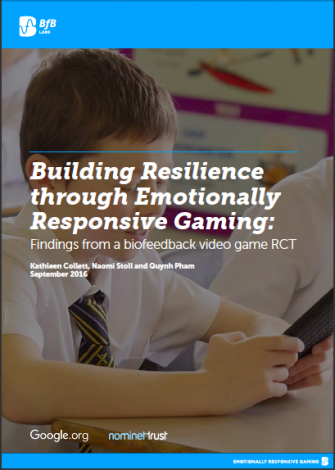 An evaluation report describing the results of a randomised control trial run with 290 young people in The Billericay School, Essex. 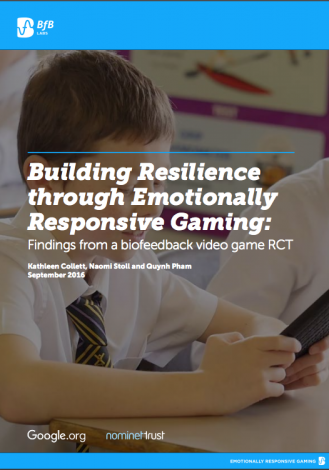 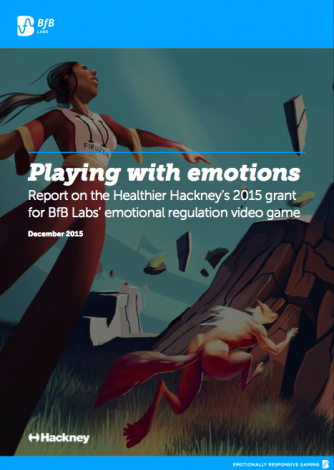 An evaluation report describing the results of a test of BfB’s biofeedback video game with two primary schools in Hackney, London. 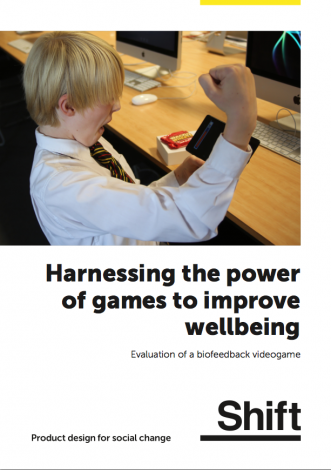 Harnessing the power of games to improve wellbeing

An evaluation report describing the results of the first test of Shift’s biofeedback video game, which uses the player’s heart rate to reward players for staying calm under pressure.
Kathleen Collett and Naomi Stoll 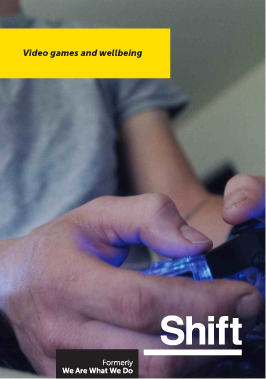 Exploring the role and impact of video games in young people’s lives, and how video games and biofeedback can be combined in wellbeing interventions.
Kathleen Collett and Naomi Stoll 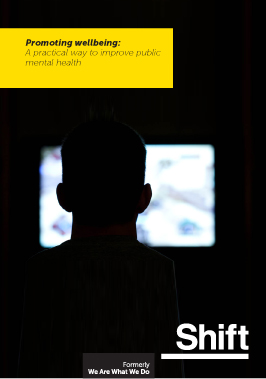 Outlining the scale and impact of mental health, who is most at risk, and the argument for focusing on wellbeing
Kathleen Collett 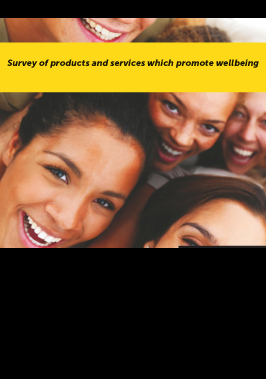 Survey of products and services which promote wellbeing

Evidence for interventions to improve wellbeing (mindfulness, gratitudes, awe and optimism) and examples of products and services which facilitate these.
Kathleen Collett and Tayo Medupin

How do these products and services work? Can they really encourage people to ‘be better’ long-term or do you need to change the system and society in other ways? ‘Who’ decides what’s better anyway? And when does behaviour change become coercion or something more controlling?

Tech for Good TV explore this in their latest podcast, featuring our Research and Evaluation Director Kathleen Collett, supported by Bethnal Green Ventures and Nominet Trust.

Over the last 18 months, with support from the Nominet Trust, we’ve been researching and developing the first version of …

We have partnered with Playlab London, Complete Coherence and 2CV to design and make a video game for young people that builds habits which increase their long term wellbeing …

Video games don’t normally get a good rap when it comes to the health of young people. Instinctively, replacing hours …

Mental health is a major issue affecting the UK population. 25% of people in Britain will experience mental health problems every year…

In April this year, as part of our three-year partnership with the Nominet Trust, we set out on 12 months of …

Depressed five‑year‑olds can be treated with smartphone games
The Times, January 24th 2019

A game you play with your heart
Eurogamer, August 11th 2017

Champions of the Shengha is a fantasy card battler that relies on your emotions
Pocketgamer, August 8th 2017

Your Ability to Keep Calm Under Pressure Matters in Champions of the Shengha
Game Skinny, October 2016

A smartphone game to beat the blues
Sunday Express, August 10, 2014

How would you change the world with half a million pounds?
Guardian, 18 July, 2014

An international research agency with specialisms in gaming and digital research. 2CV assisted in game testing and evaluation, bringing the rigorous games research used by larger game manufacturers to the project. 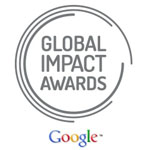 Finalist in Google Impact Challenge run by Google.org and Nesta to support UK charities using technology to tackle problems and transform lives around the world. 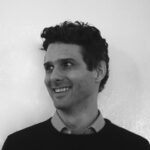