In this Joining the Dots blog series, Iona Lawrence offers a personal reflection on what relationships mean to her. Iona was the founding Director of the Jo Cox Foundation. She has been with The Cares Family for the past 8 months supporting them to develop new work to bring communities together.

In early 2017 I peered into the gloom of a dimly lit school auditorium in Hammersmith in West London desperately trying to keep 200 sixth formers awake as I flicked through a careers presentation explaining the work I was leading as Director of the Jo Cox Foundation. Proof that I’d sent pretty much everyone to sleep came at the end when no questions were asked. So as the lights came up I was heartened when a young woman came up to me tentatively asking if I’d stay for lunch.

Over lukewarm school food Hadeel explained she was inspired by Jo’s career as an aid worker and later an MP. Like me and Jo, Hadeel was the first in her family to be applying for university and was feeling her way through the UCAS process and hoping to secure a place to study International Development at the University of Sussex.

A few months later Hadeel walked into the Foundation’s small office for work experience. Amid the mind-numbing data entry work Hadeel heroically took on, I watched the Foundation’s team quiz Hadeel on her hopes and dreams and share theirs in return. Challenging one another in turn to think bigger. Interspersed with updates on last night’s Love Island episode and jokes about slang.

18 months later I was sitting on Brighton beach basking in the sunshine eating an ice cream alongside my friend who had just 2 months earlier started as an undergraduate at university just down the coast.

This isn’t a mentoring relationship in a traditional sense, for many of us who have mentored people, it’s entirely mutual. Women have done with me what I am doing alongside Hadeel. Some of it is about hard skills – proofreading CVs, helping to develop public speaking skills – and some of it is softer stuff – gentle reminders to be kind to oneself and harder still challenging one another to be better, more compassionate and ambitious leaders. I am so proud of our friendship and I look forward to interning for her when she no doubt runs for elected office in the future. 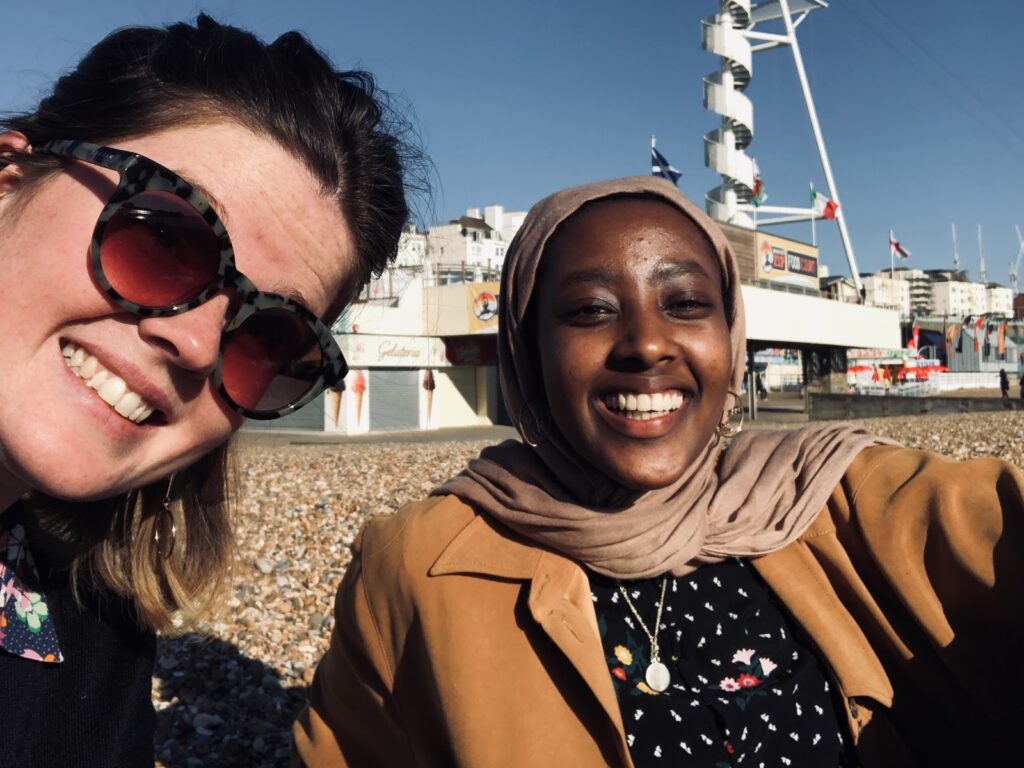 Relationships can be deep and meaningful, or brief and transitory. They can be isolated on their own: a single neighbour you exchange a few words with every few days; or huge ecosystems of friends from a political or faith group. Relationships are very simple. They are a contact sport – you show up and are showed up for. You drop in and check up. You chase up.  You are counted and in return you count.

And yet it seems that our relationships are under threat. Nine million Brits are often or always lonely, lacking the meaningful connections needed to stay well. Loneliness is as bad for our health as fifteen cigarettes a day. But this isn’t just a health problem, it’s a cultural and political one. The institutions that might once have brought us together have changed: faith groups, community groups, workplaces. Human relationships are increasingly being played out online or remotely. Three-quarters of us say that community is important to us, and yet the same proportion do not participate.

The reasons for these shifts are endless, but are the results not plain to see? Is it a surprise that the refrain many of us heard in June 2016 after the Brexit referendum was ‘but I don’t know many who voted differently to me’? The shared identity built through relationships helps us belong, makes us feel a part of something bigger. This stuff matters. It’s the essence of life and it needs protecting.

Hadeel is just one of the relationships that define me, but like this one, many of them are proudly, outrageously and deafeningly female. I am the eldest daughter of a girl-heavy brood of five children. Pushed around at school for being an introverted ginger kid derided by more outgoing boisterous classmates, I went on to benefit from the (mostly) compassionate nurturing of an all-girls education.

I am also a member of the Better leisure centre who have the unenviable honour of discussing the weather with me in my swimming costume everyday, a member of amazing networks of committed, passionate voluntary sector professionals, a ‘Commune girl’ (so named after the allotment I tended with a bunch of friends in Oval when I first moved to London) and a member of the South London Cares network of older and younger neighbours. Inside each of these communities are people to whom I have listened, been heard by and have showed up for (as much as been shown up by).

Each relationship I have is a bit of who I am and who I aspire to be. Shoulder to shoulder with friends like Hadeel, we build goals, disagree along the way, find compromises and get stuck into the hard graft of making them a reality. Collectively we build scaffolding around ourselves that is bigger than anyone of us and help us climb higher together. Together we create community.

Beyond the usual rules about on line behaviour we are interested in every point of view. Please leave your comments below.

We’d love to hear what your working on or grappling with in the world of relationship centred thinking. Email us if you’d like to contribute a blog to this open series, or if you’ve got an idea for one that you’d like to chat about.