Jon Voss runs Shift’s US operations, with a major focus on Historypin.  Our deep intergenerational work has pulled us recently toward product research in end of life care, and new and ancient approaches to the social, physical, spiritual, and environmental design of death.  Organizations and ideas like Zen Hospice, Modern Loss, Urban Death and many others are gaining momentum in rethinking death in America.  When Jon lost both of his parents this year, he was already in a place to think about our modern digital tools in light of death.

I admit to having a love-hate relationship with social media.  I tend to take a technical shabbat on friday nights to get away from email, Facebook, Twitter and the like.  But generally I enjoy conversing with friends and colleagues around the world via Twitter (in a length of conversation I’m actually pretty comfortable with), I view and post pictures on Instagram, and tend to check in with long-distance family and friends on Facebook.  But it doesn’t take much for me to get depressed by all the bad news and stupid stuff out there, so I’m quick to turn it all off.

In losing both of my parents this year, I found that social media was a welcome way to make meaningful connections, share information with many people effectively, and even invite people into the beauty of what is often the private, intimate, and even taboo experience of death.

Though we live far away, I’m close with my only brother, Joe, who is a couple of years younger than me, a lawyer and a board member of Hospice of Michigan.  When we lost my mom suddenly to a stroke last year, all of our family grieved both in private and in public.  I tended to take his wise lead on what to share on social media, as he’s someone more experienced with death and grief. We did share some of our thoughts on Facebook and Twitter, but our use of social media was more focused on simply sharing some great old photos and getting the word out about the many gatherings and memorials of a beloved former Catholic nun, teacher and proponent of social justice.

Our dad, on the other hand, was diagnosed with colon cancer over a year earlier, at the age of 84.  As a former Catholic priest and hospital chaplain, he knew the drill about cancer, death and dying.  He pretty quickly made it clear to the doctors that he didn’t want a cure and that he was very content to experience death as it came to him, on his own terms, and not, in any case, via the hospital.

After 14 months of very slow decline, things suddenly started changing and it became clear that we were nearing the end of our time together.  Our dad was a quiet teacher up to the end, and we wanted to share this beautiful and most important last phase of his life with our friends and family.  While there was no guidebook for sharing someone’s death on social media, nor precedent that we had seen, we decided to take turns writing posts on Facebook, and occasionally looping in pictures from Instagram, in order to welcome people into this process, and to be with dad at least virtually in his last days.  I didn’t post much on Twitter because I found it hard enough to express my thoughts without having to worry about character limits.

The reality of our sharing on social media was a mixture of heavy emotions, but largely a celebration and a natural close, as this was how Dad wanted it: in a comfortable Hospice facility, with only drugs to keep him comfortable. It took longer than we thought, though not much longer than the medical staff predicted.  We were heartened and surprised by how many people responded to us directly and to each other in the comments, and while we couldn’t keep up with everything in real time, we were able to find comfort in the quiet times, and knew we were not alone in the process.

For dad, it was the grand finale of a life well lived. 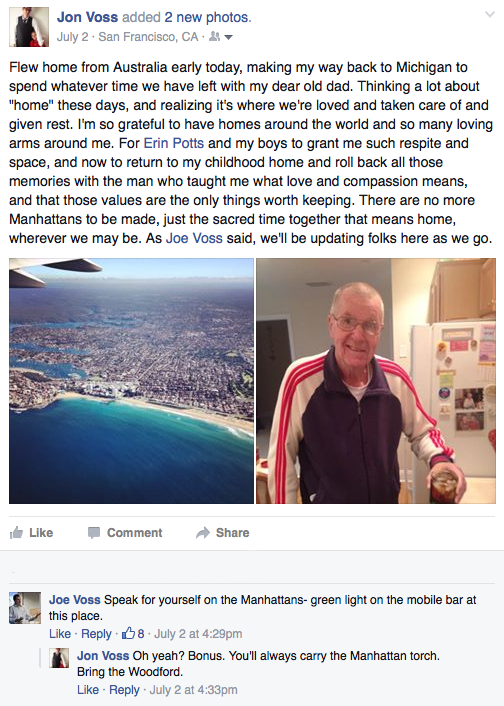