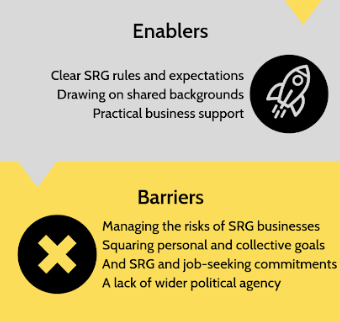 You can read the full case study below or take a look at and download the infographic which provides a short, print-friendly summary of the case study here.

WEvolution enables women from disadvantaged communities in Scotland to form Self-Reliant Groups (SRGs). Through SRGs women empower themselves by developing strong friendships, saving money, learning skills and supporting each other to create entrepreneurial opportunities. WEvolution started with funding from the Church of Scotland in 2011. This allowed women from Glasgow to visit Mumbai to learn from people and organisations in the Indian women’s self-help group movement, which inspired them.

How does WEvolution work?

WEvolution is careful not to be too prescriptive with its definition of an SRG. But as a guide, after much iteration, WEvolution and its members now loosely define an SRG as a group of 5 to 10 people from a shared economic/social background who support each other and develop friendships. An SRG typically:

What impact is WEvolution having?

What do we think WEvolution can teach us about effective relationship-centred design?

In WEvolution’s SRGs, each member contributes skills, effort and finance. This makes asking for support easier, creating more cooperative and resilient communities. On asking for a loan from her SRG, Michelle said, “I felt OK, because I think that other people in the group, I don’t think they would be embarrassed if they needed money for a cooker or anything”.

Trust and agency are the lifeblood of strong relationships, particularly among vulnerable communities

The agency involved in contributing to SRGs, and the trust these contributions earn from other members, are central to the positive changes members experience. On the sense of importance she felt upon assuming the role of SRG Treasurer, for example,  a member named Lorna said, “You don’t often get people from the life that I’ve came from that will trust you.”

As Dr. O’Connor’s research explains, “Mutual respect and understanding of shared life experiences gave women a sense that, as two SRG members said in interviews, they were ‘all in the same boat.’” A sense of commonality acts as a source of confidence, trust and mutual support.

Sometimes people need a catalyst to come together, even if they have shared experiences

WEvolution offers a framework and a reason to encourage women to come together in a way they might not usually, even if they are from the same place and have much in common. WEvolution gives a nudge to get started.

Not all relationships are entirely ‘organic’; sometimes training and rules are required

Setting clear expectations and rules around how an SRG will work is usually key to its success. This is especially true given the challenges around balancing individual and group goals, and the inability of some women to attend regularly given other commitments such as job seeking to maintain benefit payments. Initially at least, WEvolution uses training sessions to help new members think through these considerations. Training, then, is often an essential first step in fostering powerful relationships through SRGs.

What’s next for WEvolution?

WEvolution envisions a world where people in our least understood communities, especially women, take control of their lives. Its long-term vision, or ‘end-game’, is of an SRG movement that grows to a critical mass where it generates its own momentum, attracts private and public investment and is easily implemented by organisations and individuals – without notable support needed from WEvolution or other such organisations.

To date, WEvolution has conducted DIY SRG trainings and partnered with six organisations to implement SRGs in new locations in England, Wales and the Netherlands. Wevolution is now aiming to transition into a centre for excellence, continuing to start and support a small number of SRGs, but mainly focusing on championing the model, building SRGs into an open-source movement and conducting research on best practice.