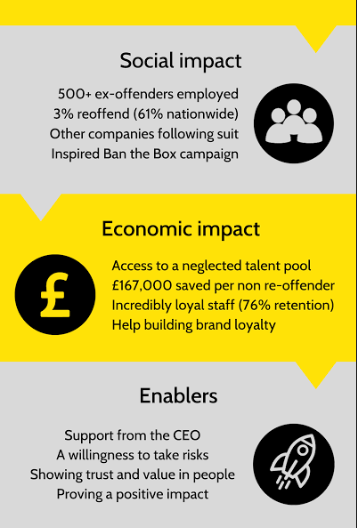 You can read the full case study below or take a look at and download the infographic – which provides a short, print-friendly summary of the case study – here.

Founded in 1865, Timpson is seemingly a service retailer specialising in signage, locksmithery, photo processing and shoe, watch, phone and other repairs. It has over 2,000 UK stores, employs 5,600 staff and owns 119 Snappy Snaps franchises. For our purposes, though, Timpson is interesting because 10% of its staff are ex-offenders, and it puts a lot of energy into its relationships with them.

How does Timpson work?

In 2002, Timpson CEO James Timpson visited a prison and met Matt, a young inmate. He was so impressed by Matt that he offered him a job after release. This anecdote marks the start of Timpson’s now almost legendary HR approach, which holds that good personalities and trusting relationships are critical Timpson’s social and business successes.

The fact that Matt has since become one of Timpson’s most successful branch managers, despite the many challenges he no doubt faced entering the workplace, is testament to this relationship-centred approach. With the best will in the world, it could have failed. The key question then, in terms of relationship-centred design, is how Timpson’s HR policy works.

After meeting Matt, James Timpson embarked on an experimental, imperfect, relationship-centred journey in employing ex-offenders. He initially interviewed and employed candidates suggested by jail governors, without telling staff. Only when he considered he had 10 successful recruits out of 40 did he tell senior staff. Their initial reaction was that he was “completely mad,” he says, before they acknowledged the 10 recruits in question were indeed good.

As impressive as the trust Timpson showed these “colleagues”, as Timpson calls the ex-offenders it employs, was, it took a series of problems for the company to realise that not all ex-offenders are immediately work ready. A range of company initiatives have since helped address this problem:

But it is championing personality, and totally trusting colleagues based on the person they are, that represents the distinctive heartbeat of Timpson’s philosophy. The company slogan – “Great Service by Great People” – captures Timpson’s belief that what counts is what a person is like now, not their previous mistakes. Timpson explicitly applies this to ex-offenders. As part of the company’s ‘upside down management’ approach, for instance, colleagues are strongly encouraged to do their jobs however they think best. They are trusted and valued as the experts. Staff at head office discouraged from issuing orders, and appraisals are no more. Ex-offenders are hired explicitly based on who they are, and trusted and valued explicitly based on who they are throughout their employment.

This provides a fantastic foundation for powerful relationships between Timpson and its colleagues and colleagues and customers. “One of the best decisions we made was to stop employing shoe repairers,” says James Timpson. “For 10 years we have recruited personalities and then taught them the skills.” Timpson attributes its impact to this approach.

What impact is Timpson having?

This social impact has economic ramifications for Timpson and the UK.

What canTimpson teach us about effective relationship-centred design?

In Timpson’s case, employing ex-offenders initially met with hostile headlines and a disbelieving reaction from other staff. But faith in the relationship between Timpson and ex-offenders eventually helped overcome these problems. A combination of quiet experimentation, a willingness to take risks, the ability to learn from mistakes and, ultimately, proof to the benefits of this relationship helped change perceptions.

Trust is particularly important in certain relationships, and cultivating trust is an active process.

Trust has proven particularly important for Timpson’s relationship with ex-offenders, given ex-offenders are often perceived as potentially untrustworthy colleagues. A vote of trust from Timpson therefore carries particular resonance for these colleagues, providing value in and of itself and creating a foundation upon which ex-offenders are motivated to work effectively for Timpson. In this case, though, given employing ex-offenders is not the cultural norm, Timpson’s demonstration of trust feels more active than implicit.

Relationships are particularly meaningful when aligned with other values.

For ex-offenders working at Timpson, the employee-employer relationship doubles as a second chance: an opportunity to regain trust, freedom and many other tangible benefits employment offers.

It is vital to treat people as people.

This may seem glib, but is central to Timpson’s success. Beyond empathising with ex-offenders, Timpson’s recruitment process steadfastly refuses to treat ex-offenders as anything other than people with personalities that may or may not be suited to working at Timpson’s. Personality, not status, is the operative hiring principle.

New relationships can require a willingness and preparedness to change.

Sometimes no amount of innovation or trust is enough to forge a rich new relationship. Both parties must also be willing and prepared to change. Unfortunately, Timpson has found it can only effectively work and form effective relationships with ex-offenders under certain circumstances.

Learning skills can be an excellent vehicle for developing strong relationships.

Granting ex-offenders the opportunity to learn new skills and find employment doubles as a vote of trust. The training process allows the relationship between Timpson and its colleagues to develop based on this trust. This benefits the colleagues, and helps Timpson by providing loyal employees and strengthening the Timpson brand.

What’s next for Timpson?

Timpson has been going for 154 years, and employing ex-offenders for 16. The company shows no signs of stopping, and continues to exert influence in terms of changing perceptions around ex-offenders.