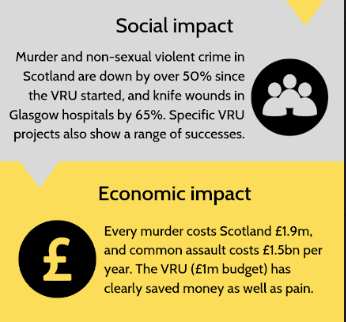 You can read the full case study below or take a look at and download the infographic which provides a short, print-friendly summary of the case study here.

The Scottish Violence Reduction Unit (SVRU) was launched in 2005, by Strathclyde Police, in response to alarming rates of homicide and gang violence across the force area – particularly in Glasgow, which was dubbed the “murder capital” of Europe by the World Health Organisation (WHO). In 2006 the Scottish Executive made it a national innovation unit, covering the whole of Scotland. The SVRU has adopted a public-health approach, which treats violence as a preventable disease.

How does the SVRU work?

The SVRU is an arms-length part of Police Scotland, funded with around £1 million per year directly by the Scottish Government. It comprises a team of police officers, police staff, experts and people with lived experience, including ex-offenders. The SVRU follows, and is the only police member of the WHO Violence Prevention Alliance process:

To this end, as an innovations unit, the SVRU has run, or is currently running, a number of projects, including:

These projects share three core features that demonstrate a belief in the power of relationships to help reduce violence:

Beyond these projects, the SVRU has also successfully campaigned for tougher sentencing around knife carrying in Scotland, and backed a range of policy measures such as minimum unit pricing for alcohol. Its approach is evidence-led and politically neutral.

What impact is the SVRU having?

However, a key challenge for ambitious, preventative relationship-centred initiatives like this is proving causality – proving impact. It is impossible to determine precisely how much these statistics are attributable to the SVRU versus wider societal shifts and other initiatives. Moreover, recorded rates of non-sexual violent crime did peak in 2002/3. “It is hard to say that CIRV was the sole cause of the reductions, though it did show a degree of success,” says William Graham, a lecturer in criminology at Abertay University who worked on the CIRV programme as a member of the SVRU.

Specific initiatives are easier to monitor. An evaluation of CIRV by St. Andrews University, for example, found that:

Subsequent academic research has also found that declining incidents involving gangs of young people using weapons in public places has made the biggest overall contribution to the reduction in both homicide and other forms of violence in Scotland.

As well as the personal price paid, violence comes with a heavy economic cost:

Assuming the SVRU, with its roughly £1 million annual budget, has been responsible for even a fraction in the reduction of murders and violent crime since 2005, it has clearly saved Scotland a great deal of money as well as emotional and social pain.

What do we think SVRU can teach us about effective relationship-centred design?

The SVRU works with a wide array of people and organisations – drawing on a broad range of community and personal relationships – to help provide interlocking relationships of support to those affected by violence. It is unlikely that a single, two-way relationship – for example between a victim and a mentor – would be enough in most cases to help that person out of violence. Public-health approaches to deep-rooted social problems recognise the need for many types of relationships.

Street & Arrow, for example, provides violent offenders with personal and employment skills, an income, confidence and, ultimately, an alternative future. This alternative future is crucial in helping those offenders build new relationships with themselves, their families, communities and others, because it gives them a feeling of trust, agency and stability that they may have been deprived of when younger.

In such instances empathy and forgiveness are especially critical to relationship-centred design and especially difficult to realise.

Measuring impact is important, especially with a high-profile, government-funded project. But it is not always easy

Treating violent offenders with understanding is guaranteed to be controversial to some people. It has therefore been essential for the SVRU to demonstrate a positive impact. It has largely succeeded here, but it is not easy to demonstrate causality with such a diffuse, preventative initiative.

What’s next for the SVRU?

The decline in violence in Scotland has started to level off. The challenge for the SVRU – and the police, government, health service, education sector and wider society – is the question of how to drive further violence reduction. Moreover, the dramatic decline in violence has been spread unevenly, with those in the poorest neighbourhoods still more likely to be affected by violence, and a small number of people experiencing high levels of re-victimisation. It will require constant innovation, radical thinking and most importantly effective partnerships to make Scotland a safer country.