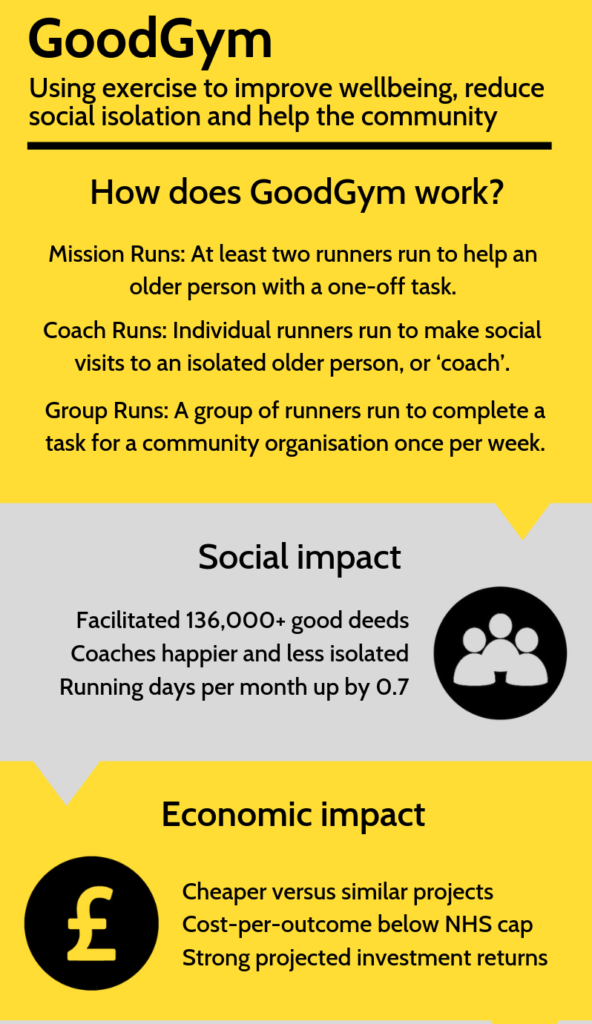 You can read the full case study below or take a look at and download the infographic – which provides a short, print-friendly summary of the case study – here.

GoodGym is a charity born in 2008, in the belief that the considerable human energy expended in gyms could be expended more usefully. Now established in 50 locations in the UK, GoodGym finds ways for people to help reduce social isolation, help elderly people and serve community projects through exercise. GoodGym has been supported by Nesta’s Centre for Social Action Innovation Fund, The National Lottery Community Fund and BT funding, and independently evaluated by Ecorys.

How does GoodGym work?

GoodGym helps runners to do social good in three ways: 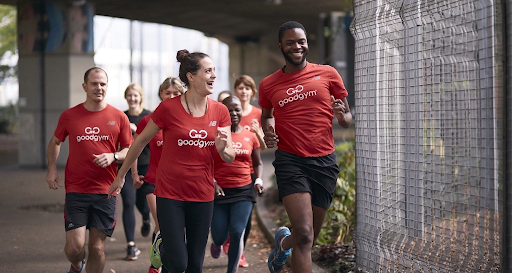 GoodGym represents a “fine grain” approach to volunteering, whereby participation is based on frequent, low-impact activities integrated usefully into runners’ lives. This helps sustain motivation and the availability of runners.

What impact is GoodGym having?

Ecorys conducted 14 in-depth interviews with runners and coaches, and 89 matched (both baseline and follow-up) surveys – 70 from runners and 19 from older people. The evaluation met the criteria for Level 2, with Nesta concluding “strong qualitative evidence supports some detailed quantitative evidence to provide a convincing indication of impact.”

What can GoodGym teach us about effective relationship-centred design?

In real relationships, all parties are genuinely and mutually valued.

We think that one of the reasons that GoodGym has been so successful is that it’s based on a model of mutual benefit. Sometimes with initiatives that seek to reduce loneliness the exchange is one-way; the isolated person is done ‘unto’. This is disempowering and unsustainable. In the GoodGym model, the ‘recipient’ (the person who receives a visit and gets help with a task) is not just a recipient; they provide motivation to the ‘volunteer’, helping them to achieve something that is meaningful to them (exercise).

In GoodGym’s case, aligning the development of new relationships with the existing value ‘volunteers’ place on running offers an important, if not sufficient, incentive to maintain the relationship.

Running is typically seen as a functional and individual pursuit. Where it is social, such as with running clubs, this sociality is typically confined to club members. GoodGym demonstrates, perhaps counter-intuitively, that people can actually be more likely to run when their workout is combined with a social or volunteering visit. GoodGym has helped expand the notion of running into something more community focused.

What’s next for GoodGym?

GoodGym continues to expand across the UK. Following Ecorys evaluation, GoodGym has received funding from the National Community Lottery Community Fund, and is continuing to develop its monitoring and evaluation framework, particularly to strengthen analysis around cost-effectiveness.