For two years now, Shift has been working in partnership with NCT, the UK’s largest parenting charity. Our project, which I’ve led and nurtured since it began, considers how a digital offering can support more parents to feel confident and capable in their child’s first 1000 days (from conception to age 2).

It’s been an amazing, insightful, heartwarming, heartbreaking and always fascinating project. It has seen us connect with over 200 parents through qualitative research and deliver a 5-week, closed beta of an online parenting community, Tip, which reached a further 400+ mums and dads.

You can check out the closed beta here.

Designed to bring parents relevant content from peers and professionals, Tip is built on the insight that parents feel most supported when evidence-based information and the reality of being a parent work together, rather than being at odds with each other.

Now, as we work on moving from beta testing to a useful, usable and truly delightful version of Tip, we wanted to share five key things we’ve learnt so far.

It’s clear that social connections are vital during the earliest days of being a parent. They help you feel less isolated, are a rich source of practical support, help you feel emotionally supported and are a great source of information that helps you feel confident and capable.

However, making social connections during a time when you’re overwhelmed with ‘newness’ isn’t always easy. We heard from parents about the intimidating feeling of trying to ‘break into’ new friendship groups, the disappointment of not bonding with other parents in their antenatal group, the struggle of experiencing social anxiety for the first time since school… the list of barriers is long.

We believe that it is because of this that information (especially that found on endless reams of blogs, posts, comment threads, Facebook groups and forums) has a dual purpose. The first is to feel informed, but the second is to feel connected.

I really liked the community feel of it. I felt like I was in the same boat as other people and getting ideas for what I could do.

It’s the reason forums like Mumsnet are so popular. We heard from a few of the parents who tested Tip during beta that the platform was going some way towards triggering the feeling of connection and community but that there was a lot more that could be done.

We’re excited to stretch this in the next phase of Tip, understanding how information can support parents to feel this sense of connection in a way that feels both more reassuring than a forum full of unvalidated content and less intimidating then walking into a public library and striking up a conversations over a rendition of ‘Zoom, Zoom, Zoom we’re going to the moon’.

2. The power of professionals

Throughout the project so far, we have been compelled by the fact that parents appear to be constantly pulled between evidence-based information – which is often generic, irrelevant and doesn’t satisfy the need for social connection and individual context – and highly personal, practical peer tips and tricks shared by other parents – which can help you feel connected and understood but don’t always and so can fail to reassure.

This is one of the insights that formed the basis of Tip. However, during the beta we were surprised just how much weight people placed on the value of tips from professionals. When we asked parents who tested Tip what they found most enjoyable in this early version of the product, the vast majority said it was tips from professionals. Not surprising, seeing as we have such an amazing group of professionals manning Team Tip.

Parents felt that this was one of the main things made Tip stand apart in the marketplace. So while peer tips are valued, we’ve learnt that without them Tip wouldn’t have as much appeal. This is something we’re excited to carry on digging into as we move past the closed beta to a fully lovable version of Tip. 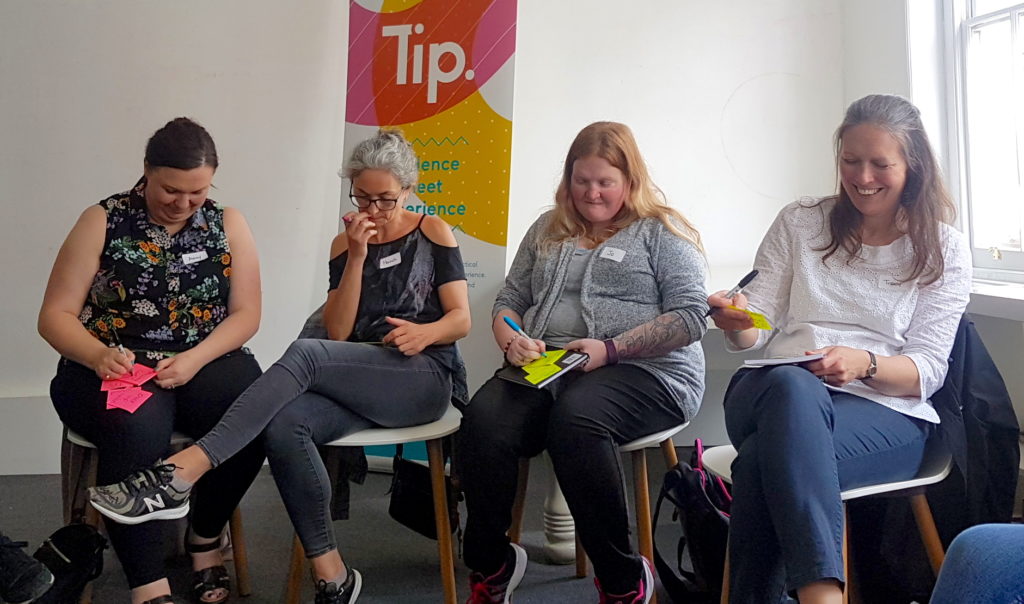 One of the biggest things we didn’t get right in this first version of Tip is tip sharing. Ironic – we know. We know that sharing ideas, information, hacks and trading stories is second nature when parents get together in a room. We also know that the web is awash with parents sharing content with each other. However, during the beta, we only got one peer tip for every eight parents who signed up. It’s not bad, but not enough yet to sustain a thriving community of tips from both peers and professionals.

When we probed, we found that two factors were at play. Firstly, while parents lamented mile-long comment threads found on typical parenting forums, these threads at least had a specific question being asked at the top – a hook or a trigger to share. It sounds obvious (and to some extent we knew this would be the case) but it’s impossible for parents to share tips without a question or conversation starter.

Secondly, we learnt that parents felt apprehensive to share tips. It’s the age-old fear of parental judgment and the reason behind the fact that there are more parents reading forums than posting on them.

We’re convinced, however, that this speaks to a juicy opportunity rather than a fatal barrier for Tip. We know parents want a way to find relevant tips without having to wade through thousands of comments and, given the right conditions, parents also have their own tips they love to share. Figuring out how we do this without resorting to long, unwieldy comment threads might be a difficult challenge, but it will be a rewarding nut to crack.

We know that parents love to scroll and tap. We all do. Parents told us they found themselves scrolling through Facebook during the 2am feed, and regulating their emotions with taps and swipes.

It’s got the perfect feel for logging on for a few minutes – when you’re on the loo, during nap time, while watching TV…

We built a lot of the user experience of the early version of Tip around this resonant (and often calming) feeling, giving parents a place to indulge habits in a more supportive and confidence-building place.

However, while this insight remains true, our desire to indulge the desire to scroll meant that we were also making parents wade: something they did not love. When we asked parents what part of Tip they found least enjoyable or useful, the majority either said ‘browsing or scrolling through the tip feed’ or ‘searching for specific tips’. Doh.

So, while we remain convinced that parents deserve to enjoy a tap, swipe and scroll in a space designed to help them feel confident and capable, we also know we’ve got a lot of graft to do to make that really work. 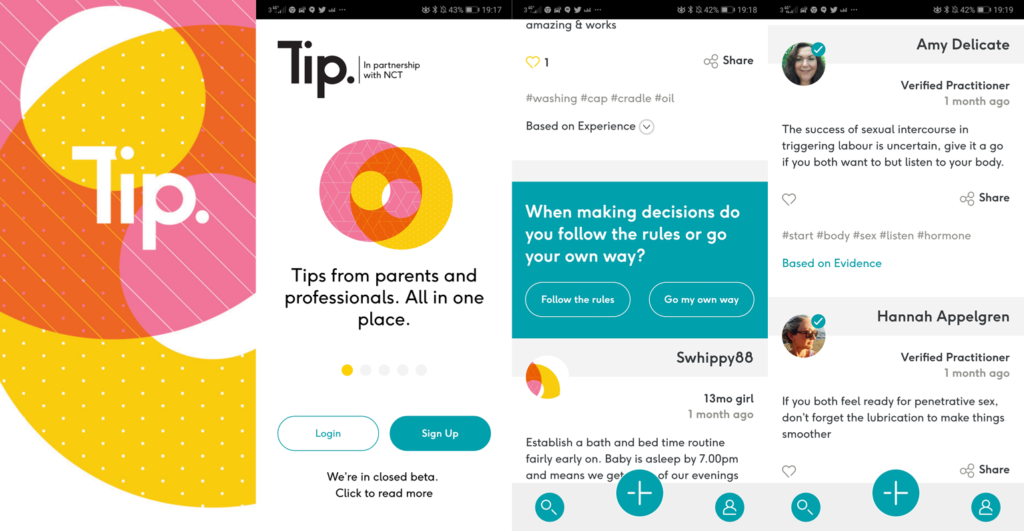 5. The promise of personal

During the closed beta, we stripped back many of the features of Tip that were related to personalisation as we felt this wasn’t the most important first thing to test. We did, however, add in some basic functionality when parents signed up and included deeper personalisation questions in the tip feed to test parents’ appetite to share.

I wanted to make some tips disappear because I didn’t like them.

This is great news for Tip, and an early indication that parents have both the appetite for personalisation and the desire to share more information about themselves in order to receive it. Some parents we heard from also suggested an appetite that they wanted the personalisation to go much further. A challenge we can’t wait to take on.

There are so many other findings we could share, but this blog is already a tad too long. It’s all just to say we continue to be excited about the potential of Tip to support parents and create an online space that truly helps them feel confident and capable in their child’s earliest days. There is so much yet to do and learn, but for every ‘doh’ we’re inching further towards a product that delivers lasting impact in a measurable and truly delightful way.

If you’re working on anything similar, keen to hear more, or want to connect with the Tip team, please leave a comment below or get in touch. Keep an eye on Tip for all future updates.